From the minds that brought you the Padook, a combination Greenland paddle and boat hook, springs the Crickle, a cricket bat shaped paddle for small small boat usage. We credit our friend Chris for recognizing the similarity to a cricket bat. The design impetus for the Crickle was the need to have a paddle on a very small boat, like a Sunfish or Sailfish, where there is limited real estate to stow it when not in use. The small paddle would be used to get out of the wind shadow of a tree line, a few quick strokes to paddle through a tack in a light wind, and for use when the wind dies. It can also be used to fend off boarders.

We had a few paddles laying around, neither one of these floated our boat. 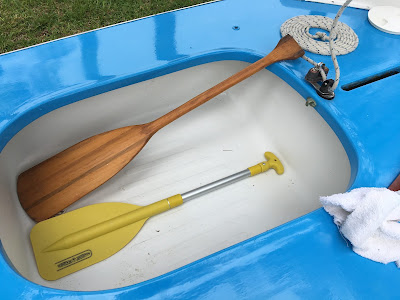 We first tried making a short paddle, short enough to fit in a Sunfish cockpit, with a big, conventional blade. Took it out for Sea Trials and found it still took up too much space, and was not easy to control one handed. It probably would be good for a longer distance when the wind dies, two handed. About that time we received our first Greenland paddle, and while marveling at the blade design we wondered if it would work on a short paddle. We made Crickle Version 1.0 from a white pine 2x4, easy to shape, cheap, available and floats well.

Cut the 2x4 to length, which is a secret. 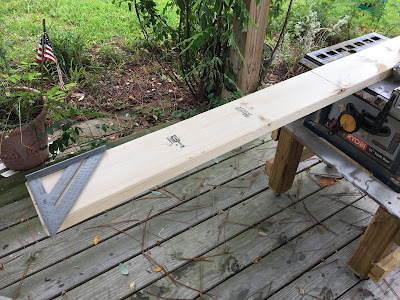 Marked centerlines for the paddle shape and trimmed the handle down to 1 1/2 inches per side, the dimensional measurement of the "2 inch" side of the 2x4 as it turns out. Used the table saw to cut most of it then cut the handle neck with a jigsaw. The desired blade shape will be a symmetrical ellipse, similar to a symmetrical wing on an airplane. 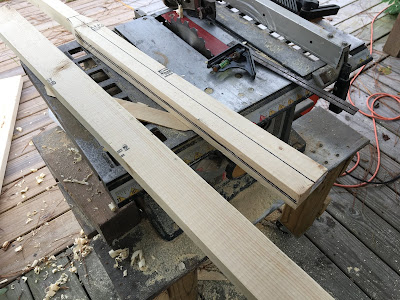 Marked a round tip with a highly calibrated template and fine precision Sharpie. 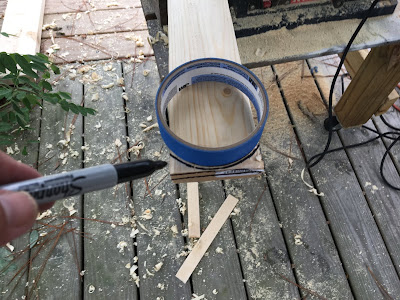 Marked centerlines of handle, to be used as guides for the Stanley #51 spokeshave. 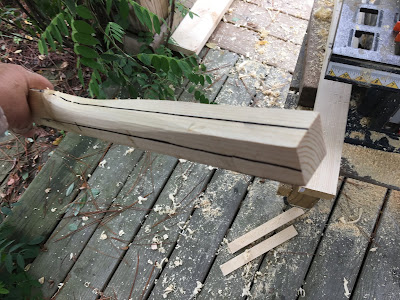 Rough shaped the paddle with a Kobalt power planer, smoothed it with the spoke shave and Stanley #5 Jack plane, and finished it off with 120 grit on a DeWalt random orbital sander. Shaved the spoke shaped handle with...you guessed it...the spokeshave. Compare the Crickle blade size to the Greenland blade, we put the handle not quite halfway down so we could put one hand there as a fixed hinge point by our hip and use the top grip hand to work the paddle back and forth with a light grip. 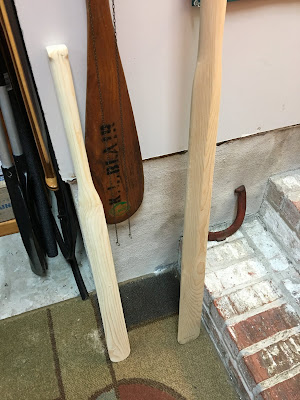 We tried it first on our AMF Sunfish SUGAR 2, it did what we hoped it would do and lived happily on the cockpit floor. Lightweight and easy to get out of the way. It could also be carried by the splashguard. The motion is more of a sweep than a dig, that 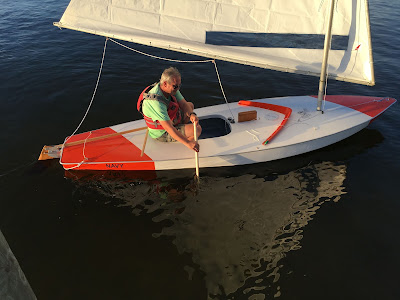 Tried it out next on the Alcort Super Sailfish ZSA ZSA, I used it to paddle 250 feet out from the shore to the light ripples on the water, used it on a lazy tack and then paddled back in another 250 feet when I was done. The paddle sat secure next to the handrails but some other means of securing it like a lanyard (we called those dummy cords in the Marines). 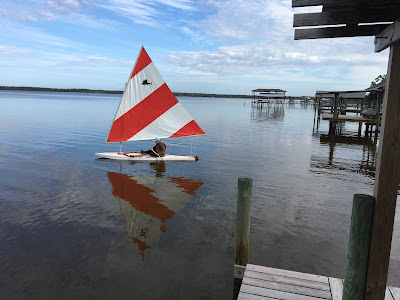 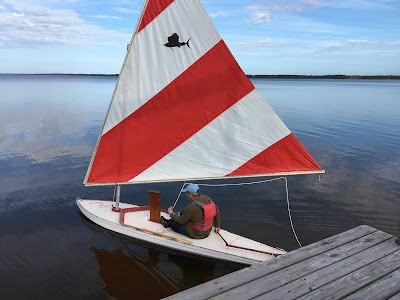 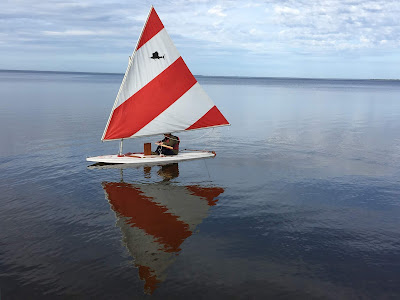 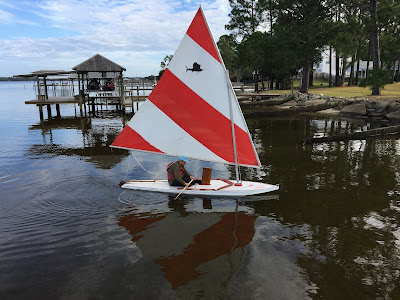 The Crickle is just under 3 feet. 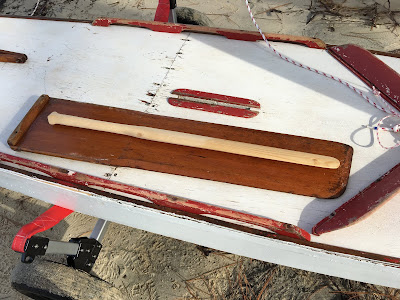 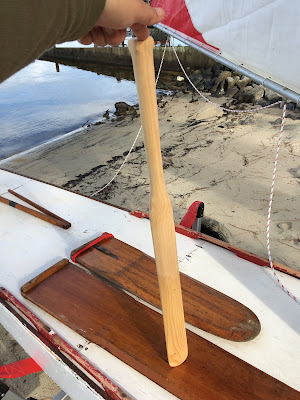 Potential design variation is to add a boat hook, which would change the name to Padooklet (trademark claim).

Tried out some new to us varnish on the Crickle, TotalBoat Halcyon Amber Gloss. It can be recoated in one hour and requires no sanding between coats. One coat today and in the next few days we'll try the multi coats, our Padook need to be varnished also and Skipper's Greenland paddle. 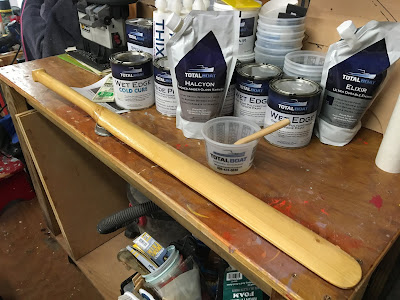 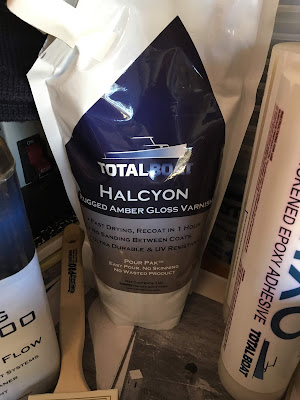