We wanted an area to store a couple of Sunfish sailboats, under cover, and out of the mud, so they would be free of dirt, bird poop, pine sap, etc... We did not want anything too tall as pine needles would blow under it, and it would block part of our view of the water from inside the house. We planned to leave all sides open for air circulation and heat reduction.

v1.0 So we designed a low roof aka lean-to set on 6x6 pilings, with a shingle roof to match the house. Found out that a low pitch shingle roof is not a good idea, it became a mildew factory. Dirt floor not good either, mud pit at times. But it kept off the pine needles and bird poop! Halfway there. Overall, it was a huge design failure and excess expenditure of funds for materials, but I learned what Shack 2.0 needed. All of the old roof was cut off with a circular saw, I recommend using a dust mask and covering up exposed skin while doing that, I created lots of moldy sawdust!


v2.0 Renovated our sailboat shed, aka the Sunfish Shack. We changed the roof over to metal, added a deck and a ramp. The main function of the shed is to keep the pine needles, rain and sun(UV) off of the boats, keep them ready to go sailing without having to spend 30 minutes cleaning them up first. The old shed roof was lower, with plywood and shingles, and it leaked. The goal for shed 2.0 was to raise the front edge, lower the rear edge, remove excess roof support 2x6s, and add a deck with ramp to get trailers out of the mud that likes that shaded area.


The new shed has 3 stalls, big enough to hold Seitech dollies or our double stack trailer. The roof is MasterRib 29 gauge metal from Lowes placed on 2x4 rafters and 1x4 purlins. The front 2x6 roof joist was moved up the 6x6 post to the top and secured on both sides with metal hurricane ties. That raised the front of the roof. The rear joist was lowered the width of a 2x4 on the rear posts, leaving enough room for the rafters and roof to clear the top of the posts. I also added a few racks by screwing 2x4s to the posts to store our restoration project boats CHIP (wooden Sunfish) and ZSA ZSA (Super Sailfish). These can be removed when the boats go into the restoration queue.


The wisteria likes the shed, it thinks it is one big trellis. I reused the 2x6x16s from the front and rear roof joists and to frame the deck around the bottom of the posts. I had to buy the 2x4x16 rafters and 1x4 purlins to support and secure the metal roof, and reused hurricane ties to secure them to the joists. The roof is secured with a special metal roof washer and screw, screwed into the purlins. Since the roof is low I had to find a screw long enough to get fully into the 1x4 but not stick out under the roof and poke me in the head :)


I framed the perimeter of the posts with rescued 2x6s. Underneath the deck I used 2x4s and 12 inch square pavers to support the deck. The deck was made from salvaged 2x6x16s cut down to 12 feet, with the scrap end beveled and used for the front ramp. I ran out of old lumber and ordered 2x6x12s to finish the deck, but 2x8x12s were delivered instead. I adapted and the deck/ramp came out real nice. There is enough room under the front half of the Shack to work on projects! Here is our Super Sailfish MKII SWEET EMOTION sneaking onto the new deck.

Before the 2x4 rafters go up permanently we like to cut decorative ogees into the ends. In this photo we were checking the spacing on the 2x4s.

The 2x4 deck joists are screwed into the 2x6 frame, I added some pavers mid span to prevent sag, although I don't plan to have much weight on the deck. I also leveled the dirt under the deck with sand to improve drainage. The deck is elevated off of the ground like a dock, so any heavy rain should run off behind the shack or is welcome to runoff underneath.

18 Mar 2015: Current state of affairs at the Shack. 3 fiberglass Sunfish, one wooden Sunfish and one wooden Super Sailfish.


v3.0 The Sunfish Shack was so popular that we added 2 more stalls. Had to move the wisteria and it was not happy (fast forward it is growing back from underneath Bin 4). Note that in Bin 1 we are building our Penobscot 14 ST. JACQUES, and have put up some weather curtains. We had a table with some saws and tools out there for a bit, but there was too much humidity to leave them there for long. That was a lot of fun, we kept the little grill fired with offcuts and miscuts...lots of them... 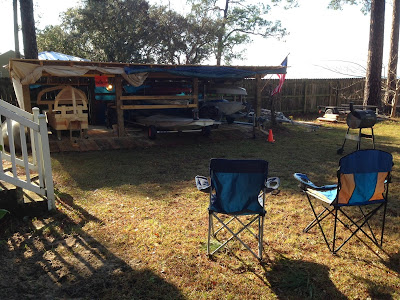 v4.0 Added 2 parking spots for empty trailers at the end of the Shack, or if we get an oversize boat that won't fit under the low joists. Or if we get a catamaran that remains rigged and ready (SMEDLEY). Added wisteria on the end and extended the path behind the Shack. The Penobscot 14 is finished and reclaimed her spot, and there are a variety of wooden and fiberglass Sailfish and Sunfish sprinkled around. The wooden Super Sailfish and Sunfish storage rack was trimmed down so we had room to move around boat in Bin 2. 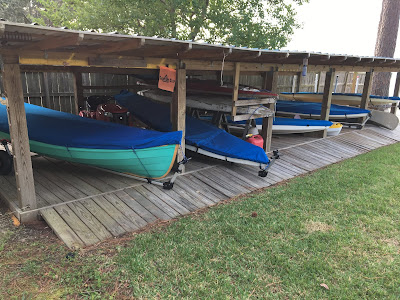 Looks nice, the little path? Didn't last long, a storm came up and washed most of it away, we have some beach erosion that needs to be addressed. (Edit: And it was, Winter 2019, 22 feet of yard on that corner was reclaimed, the damage was remnants of Hurricane Ivan from 2004, seawall was not repaired by previous owner. We finally saved money to have it done, and saved several heritage pine trees in the process.) 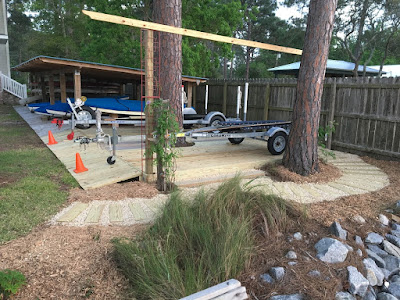 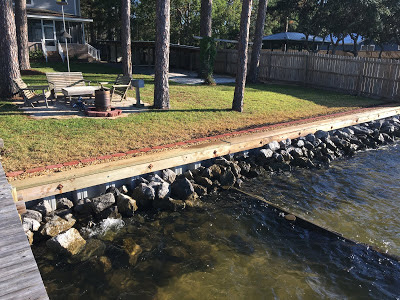 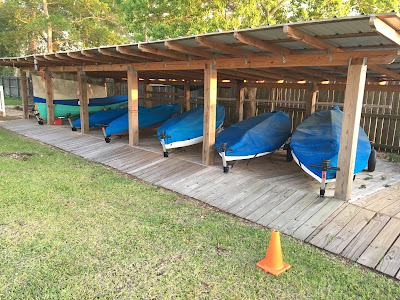 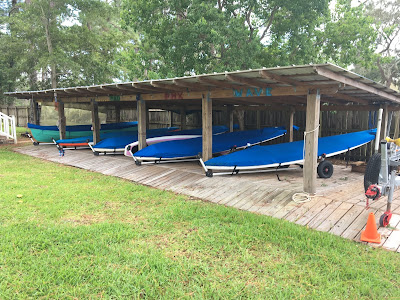 PHOENIX is airborne to make a temporary spot for ZSA ZSA. 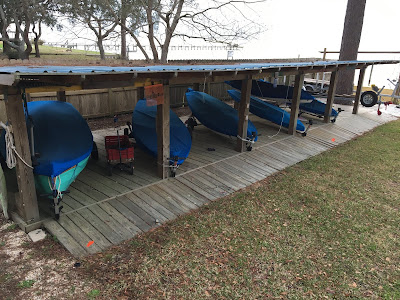 AMF Sunfish BOOMER headed off to her new homeport, time for Shack Tetris. Super Sailfish ZSA ZSA moved into the open stall and PHOENIX landed back on her dolly.

(L-R) Penobscot 14 ST. JACQUES, Alcort Super Sailfish ZSA ZSA, AMF Sunfish MADISON, AMF Sunfish PHOENIX, KM SUP PINKY and the ship that started it all, Alcort Sunfish WAVE. To learn more about each boat click on their page link off to the right. 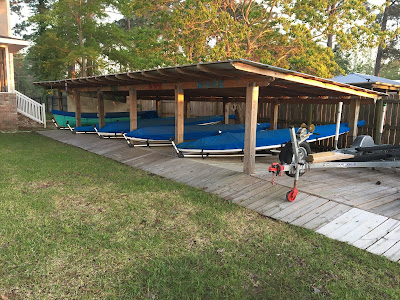 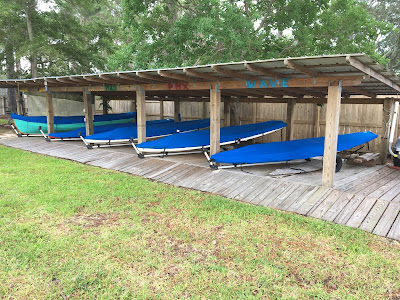 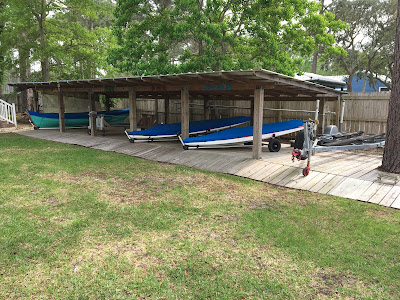 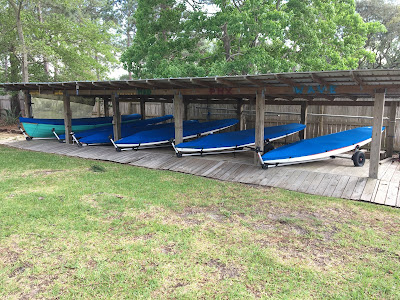