The temp index here in Florida is dropping below 100F, so maybe a few projects will start moving again. One we worked on earlier this year was a gaff rigged sailing canoe, using our Grumman 17 canoe SCOUT as the platform. We are having fun with it, we were inspired by Skipper's family, they built a sailing canoe with a lateen rig when she was little. It had a nice shark nose, and tail, and sported a lateen rig. Capn Jack did a nice job fashioning the spars, a pair of leeboards and line steered rudder. Admiral Nelson did a beautiful job of trimming down a Sunfish sail to about 60 square feet. 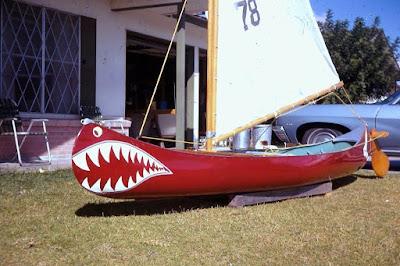 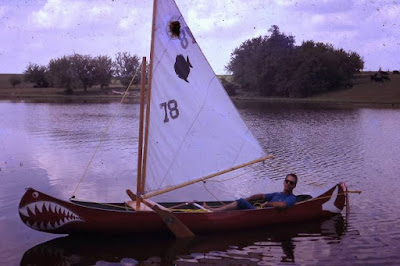 Sea Trial reports from 1970 were that the canoe was fun, but some of the Test Crew reported concern over capsize potential and staying clear of the maze of lines. The trick was to stay low and go slow, in light winds. We have experienced similar characteristics, but are still in the early stages of the CDIO lifecycle, hovering around the design phase and focused on fashioning a rudder system next.

Capn Pete Culler said boatbuilding was "mostly about correcting one mistake after another, with the first mistake having been to have begun in the first place. But oh what fun!"