The Florida Summer has been wicked hot, so Skipper and I have been hiding indoors, but still managed to pick up summer colds. Miserable for several weeks, but getting better. As a result, small boating and working on shop projects have been almost non existent while we wait for cooler temps. We did get out to the shop to take some pictures for an upcoming article in Small Boats Magazine on our new toy, the Dust Deputy. It is a centrifugal particle separator that hooks in line to our Shop Vac, works great. More info on that in the September issue! Lots of other good articles to read in the meantime. As a result of the photo shoot, I may have accidentally finished sanding WAVE's bottom, and now we are ready to start fiberglass repairs.

August has been a good time for research though, we are researching the current day status of the 1820s race boat AMERICAN STAR, a specially designed 27 foot 4 oared gig that raced the Manhattan area of New York. Crew of five. She is currently preserved outside of Paris at the estate of General Lafayette, she was given to him in 1825 as he finished his tour of the United States, all 24 of them. She popped up recently in an article in Chasse-Maree Issue 302, and their staff has been very helpful in sharing information with us. Blog post soon on the boat.

For More Information: Chasse-Maree no. 302

We also are continuing to gather information on the Navy Curtiss Flying Boat NC-4, rounding up some old photos. We purchased this one, it was interesting to note the wedges ahead of the front wheels on the railway dolly, they helped clear sand away from the railway as the dolly went down the ramp. Before they came up with the wedge idea, Sailors would be out in the water with shovels trying to keep the rails clear. The smaller dolly on top of the railway dolly had wheels that castered 360 degrees, useful for moving the aircraft inside of their new hangars at Rockaway, well, 2 of the NCs anyway...somehow the measurements were off and only 2 of the 4 aircraft could be hangared. And take a look at the planking lines on the hull up by the bow, there is indication of the reverse curve design that Herreshoff was able to build, the other NCs did not have it but rather had a flat hull up forward. We think that curve helped with takeoff performance and reduced pounding during both takeoff and landing. 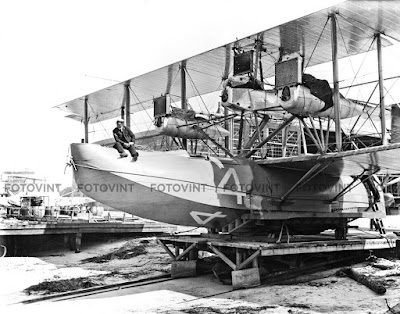 Clark will be traveling to Bristol, Rhode Island and giving a presentation at the Herreshoff Maritime Museum September 18th, reception starts at 6 p.m..
FMI: Events

Another rabbit trail led us off in search of information on a beautiful picture taken by Benjamin Mendlowitz for the cover of WoodenBoat Issue 209.

Turns out she is the Gil Smith design MADIGAN, lines taken from SENAD. She is owned by Donn Costanzo, owner/operator of Wooden Boatworks in Greenport, NY. Copies of the beautiful photo can be ordered by scrolling through covers on Benjamin's website: https://www.woodenboatscalendar.com/woodenboatcovers.html

Cheers!
Clark and Skipper
Posted by Clark at 4:36 AM