Got out on the water in ST. JACQUES today, we wanted to have a little fun, reclaim part of the bay and see if we could spot any items that were still MIA from Hurricane Sally, like our channel marker number 6 sign. 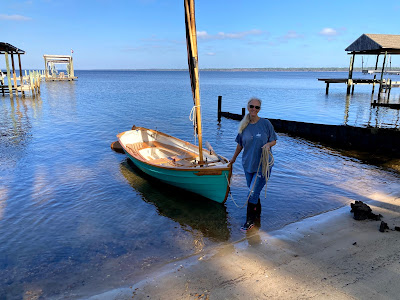 But first Skipper had to clean storm debris out of the centerboard trunk, pine needles, bark and tree leaves.  There was so much muck packed in there by the storm surge that the centerboard would not move. She used a knife and a stick to dredge out debris, and poured water into the trunk to flush out the muck. 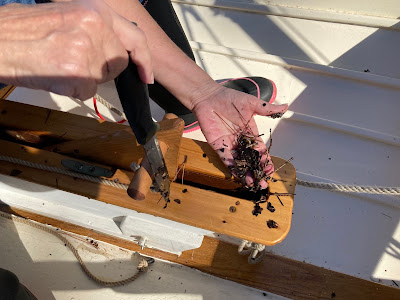 Ready to go, I planned to row mostly but Skipper had other plans. 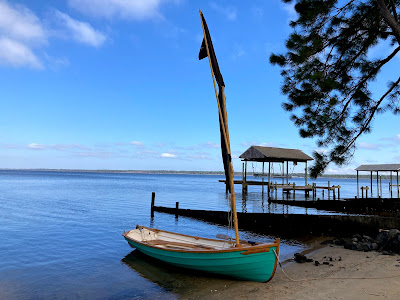 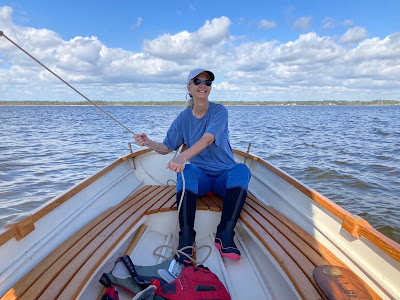 Back from a successful row and sail, 75F with light winds 8-9 mph, coming out of the East which made for a nice broad reach. 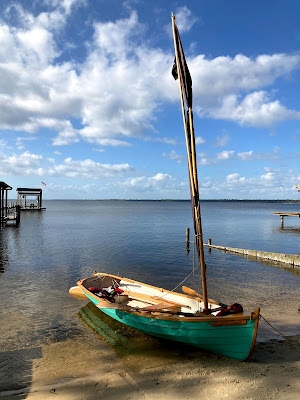 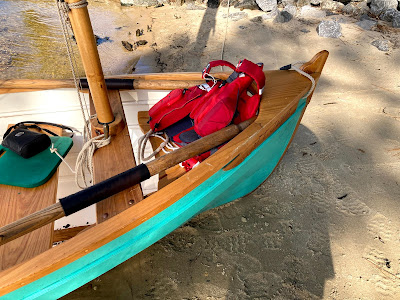 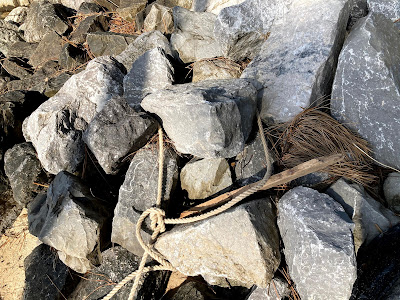 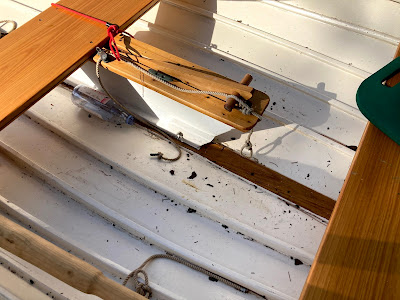 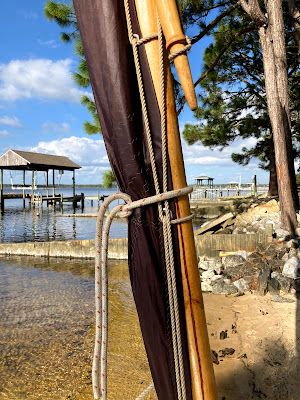 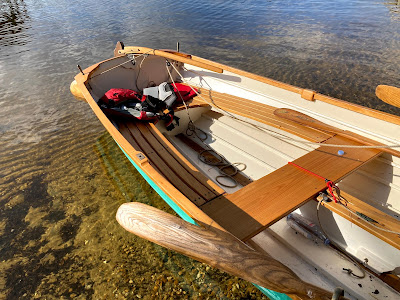 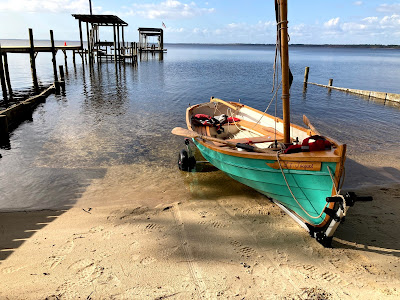 Maybe we should have cleaned out more of the muck and bay residue before we left, but when we were done ST. JACQUES got a fresh water rinse with a little TILEX added for style. TILEX is great to remove mold and mildew, but it is best to spray it on a rag, wipe down the boat then rinse right away. If it is sprayed directly onto some paints it can run and leave a lighter bleached out streak. The streak eventually fades but it is best to apply the TILEX sparingly in small locations, a little goes a long way. Test it out in an inconspicuous area and as always, read the application and health hazard information on the bottle. The Porter Cable cordless Wet/Dry Vac makes short work of sucking muck out of the bilge, 2 1/2 gallons at a time. Nice to not have electrical cords in wet locations. 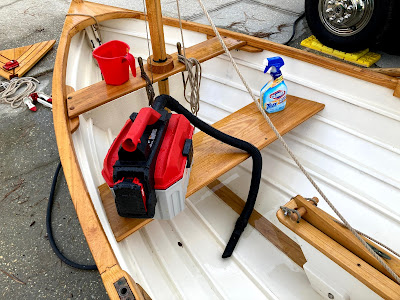 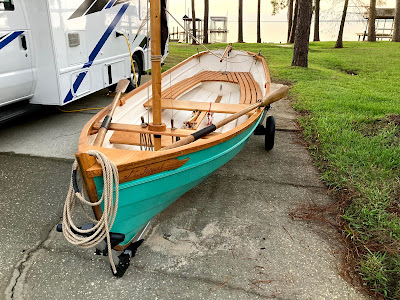 ST. JACQUES rode out the Hurricane mostly carefree, she did get a little rash on her lower strakes, possibly from the boat next to her or the dolly. 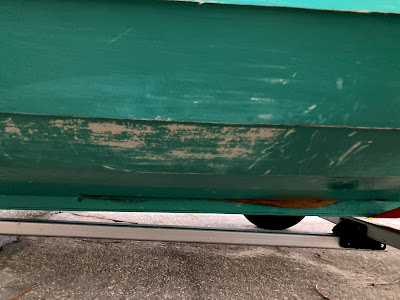 Very small rub on the gunwale, which was protected by a Sunbrella cover. The cover didn't fare so well, it needs a few repairs, but it did Yeoman's work protecting the boat as no water got inside during the storm. Interestingly enough, the wooden boats in the Sunfish Shack did amazingly well, the fiberglass boats not so much. 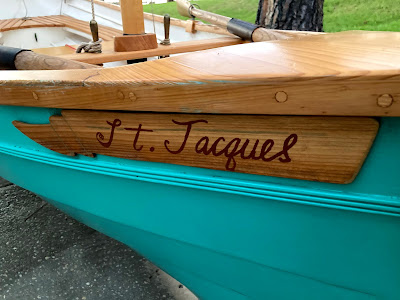 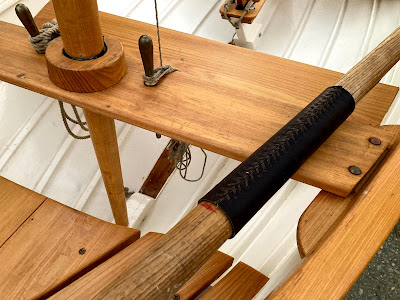 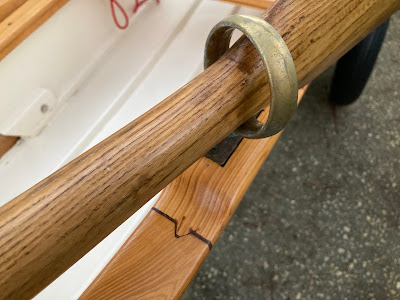 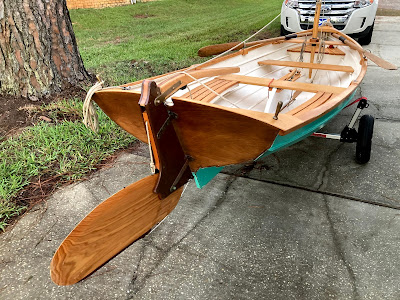 In other news we put down 12 tons of #4 crushed limestone along the inland side of the seawall, with help from a Toro Dingo, along with topsoil and sod and. We are going to call restoration of the quay, aka Mini Gun Deck, complete. 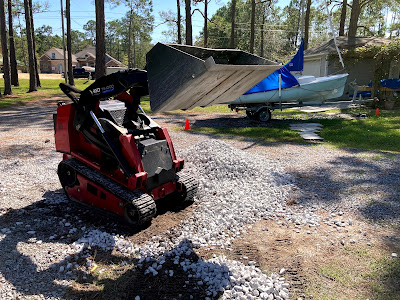 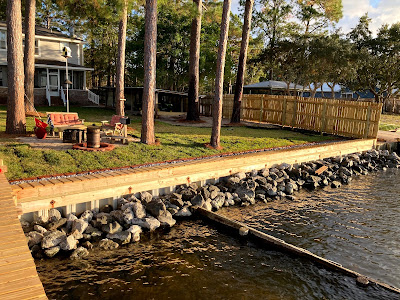 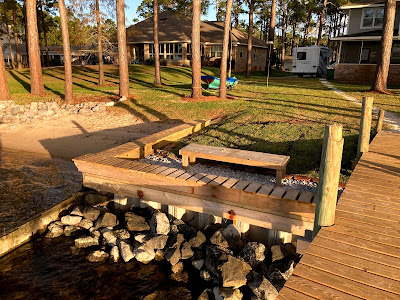