Built a table for crafts and small boat work out of cypress, 2x4, 2x6 and 4x4, picked from the Wilson Cypress Mill.

Sealed it with Olympic clear sealer.

16 Jan 2015: We wanted a place to store a few boats so we decided to build a boat shed...boat house...boat barn...garage...studio...gallery...pub shed...she shack...Heuer Garage...Boat Works...man cave...carriage house. The hard decisions in the concept stage were 1) What to call it 2) Where to put it and 3) What size to make it. For now we are calling it the Studio, though I'm sure that will change each day (Edit: It changed, it is the Carriage House now.) As for location, we considered the side of the house but running water can get high there during heavy rains. So we settled on the front yard, which is actually kind of the back yard as we like to look at the Bay out "back." Then we took into account the different County setbacks and picked the location. As far as the size, the shed needs to hold our small motorboat, which is 18 feet with motor and trailer tongue, 5 feet wide. We also wanted to get one to two more boats in there if needed and have storage for mower, garden tools, trikes and a few shop saws. So right now a 16x20 foot shed is going up.

We wanted this construction to match the house in looks and material as close as possible. I priced out the basic materials and got to a point real fast where, talent, time and money wise, it made more sense to hire a shed building company. We had seen sheds and buildings built by Gator Tough in Pensacola and liked them, so we contracted with them for the construction. The shed will be built on 4x4 skids and anchored with hurricane straps. It will have a ramp for the garage door and personnel door. As they put it together I'll share pictures, in case you're considering whether to build one yourself or have it done.

We picked a relatively flat area in the yard, looked for a spot where we didn't have to cut down any trees. There is a road behind us in this picture, so the shed goes out front to avoid blocking Bay view behind the house. Also going to place it off to the left side a bit.

Survey flags placed. Our County requires 50 feet from the front property line, 5 feet from sides and 10 feet from the house. There is also a setback from the water but I can't remember that number. If the shed is under 600 square feet and not plumbed, so all we need is an exemption form to build.


Gator Tough crew showed up and started laying out the foundation blocks. For Day 1 they brought the foundation, floor and wall studs. The blocks will be used to level the skids, and the shed will be built on top of skids. Other option was a concrete foundation, that would have added about $5000 to the project and I wanted a wood floor for the wood boats and for potential lofting and building of boats one day. The wood floor will help keep the boats from drying out.

Pressure treated lumber was cut and added in as needed for shims and 2x4 joists started going down over the 4x4 skids. Other options are 6x6 skids and 2x6 joists, but our boats and trailers are light (800-1000 pounds). We did elect to go with 12 inch on center (OC) joists and a thicker plywood floor (7/8 inch) so the trailers will not punch through.


16x 20 frame squared up, then roofing felt was laid down as a water resistive barrier (wrb). The felt breathes so any water that finds its way under the shed will not get trapped against the wood. Additionally all of the skids, joists and flooring are pressure treated or exterior grade. Then they started nailing down the floor.

I helped hold the felt down :)


One guy cut and marked wall stud placement while the other nailed. They move fast!


Walls were nailed up on the deck then stood up. There will be two windows on this wall, that's why the studs are spaced like they are. A 2x4 is used on each end to hold up the wall until they can get it squared and plumbed. There are also hurricane straps to tie the bottom plate/studs to the floor and the top plate to the studs.


There will be a french door on this wall.

Two wall top plates get notched so that the adjoining walls overlap and tie in.

View from the front door.


Staring on the back wall, far wall will have a garage door.

There's the opening for the french door.

Wall sheathing is up!


Bottom of sheathing is wrapped with a waterproof membrane, to prevent water intrusion from below. The wall sheathing will be wrapped with a moisture barrier and then covered with Hardy plank.


James built the rafters on site and cut the ends. They hang them upside down then flip them from either side to stand them up.

The notch on the left is where the rafter rest on the top plate and the end is beveled for fascia board.


Roof sheathing with hurricane clips between panels. Crew added a board to hold walls together with extra weight of crew until roof is finished.


Sheathing will be trimmed back for a 12x7 garage door.


Waiting for the french door.

We filled up the shop fast!


18 Mar 2015: Willow and St Jacques enjoying some sun while the deck of the carriage house gets a coat of Olympic clear sealer. 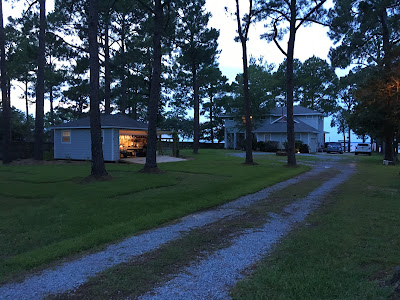 Added a 12x18 side work deck for sanding and cutting, trying to keep dust to a minimum inside shed and avoid creating a mud pit next to the shed.. Also widened ramp a bit so tools and boats on wheels can be rolled in and out. Then added pergola, wisteria and grapes for shade.

The shed turned out to be the perfect spot to work on BARBASHELA and ST. JACQUES. Both boats were on rolling strongbacks, so they could be moved around as needed to create work space. BARBASHELA was 21 feet long, so she had to turn diagonal at the end of the day in order to close the door. 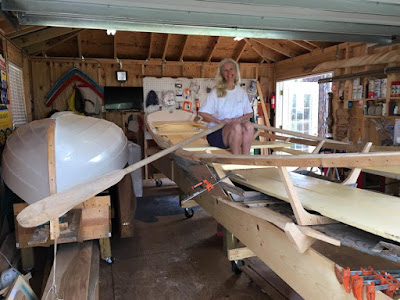 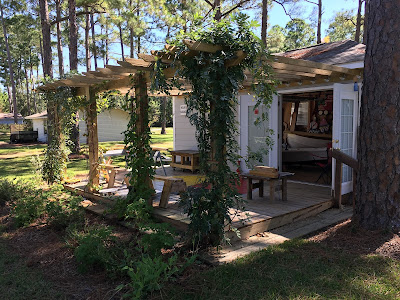 I am on the tribal rolls of the Citizen Potawatomi Nation, this is our medicine wheel. From the CPN website: "Many Native American tribes recognize the significance of the medicine wheel, the colors and directions that are associated with them.

For the Potawatomi, the East is the direction of new beginnings and life, and signifies springtime. It is associated with the color yellow and the Potawatomi medicine of sema (tobacco). As an elder once said, “Sema precedes all things,” meaning tobacco is used by the tribe as a blessing before starting a ceremony or gathering.

South is the color of red, and signifies the summertime, when the weather is warm. It is the direction of abundance and plenty, and is the direction of the medicine kishki (cedar). Kishki is used to prepare for ceremonies, and there is a tradition of a trail of cedar from the fire to the sweat lodge. Pipes belonging to tribal members that were made of cedar would be laid on the ground between the two structures. Kishki is also mixed into tobacco to provide enough smoke to get the attention of the spirits who will see the prayers of the Potawatomi. Cedar boxes are also used to keep mites and other insects off of ceremonial eagle feathers.

West is the direction of the medicine wabshkebyek (sage) and its color, black. Sage is used in the practice of smudging, where smoke is wafted over a person to rid the body of negativity. In fact, prior to CPN Legislative meetings, it is not uncommon for a smudging ceremony to take place prior to representatives and government officials commencing regular business. In the case of eagle feathers, smudging is used to cleanse the feathers. West also signifies the season of fall and of endings, and Potawatomi beliefs traditionally held that once a person passed on, they moved in that direction. This is why traditional burial ceremonies held that bodies were passed out a Western window.

North on the Potawatomi medicine wheel is the color of white, and is the direction of elders and winter time. In the days when the Potawatomi lived in their traditional lands near the Great Lakes, the winter snows were thought have a cleansing power on the land. This is also the time of the year that the spirits are asleep, which is why winter stories are only told during this time. White’s medicine is wishkpemishkos (sweet grass), which attracts positive spirits and used after a smudging of sage.

The medicine wheel is a teaching tool that is intended to help people remember these important and significant aspects of life. Life itself is viewed not as a line, but rather a cyclical thing that has its own seasons of life, death and renewal."

For us our spirit is renewed as we work on renewing the boats, and we are thankful for opportunity to do so. 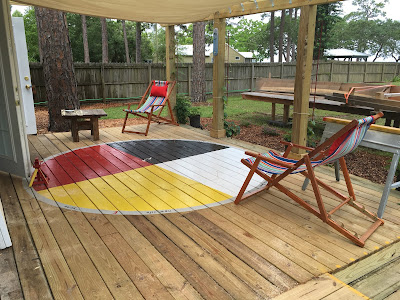 Carriage house update. Runabout spends a lot of time on the covered boat lift, which opened up a spot for the WINNIE and ZIP on one side. We like keeping them in a wooden structure, protected from weather. The other side of the carriage house is used for primary projects. VIPER is riding the Sunfish work dolly while PHOENIX rests outside on a Dynamic dolly ($495 USD from our store). 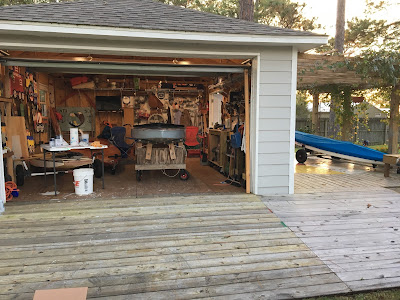