The older wooden daggerboards for the Sunfish don't have a hole to run the new retaining bungee through, so we add a stainless ring and eyestrap. 3/4 inch number 8 screws work well, with a 1/8 inch pilot hole drilled. Make sure your ring is large enough to pass the bungee buckles through. 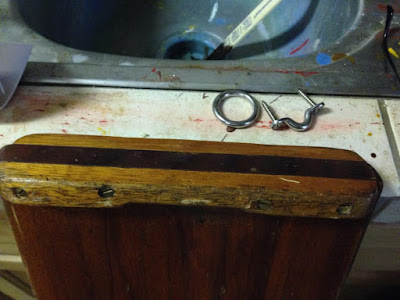 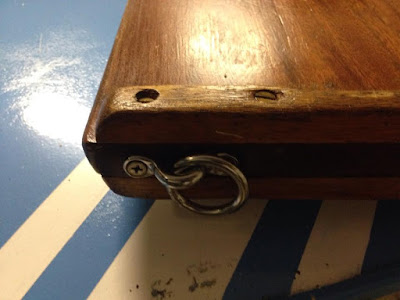 Pretty much every old Sunfish that we come across needs at a minimum a bailer, a bow handle and a line kit. Other common repairs are trim rivet replacement and sealing up cracks in the daggerboard trunk or mast step. Here are a few of the items we had to do to get Scout ship shape.

The bailer was old and missing the float ball so we removed it. Take a set of large pliers and twist off the bailer nut. You will probably have to hold the bailer on the bottom as well so it does not spin, which can be done by one person if you are coordinated and have long enough arms :) 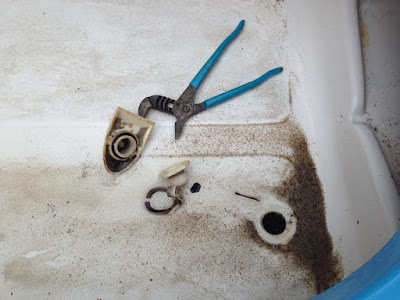 Clean up the bailer hole and check the seam between the cockpit and hull for voids, as water can leak into the inside of the hull from here. If you see an opening or thin gap in the seam, fill it with epoxy resin or putty. You can add a bead of marine silicone when you install the new bailer but it is not required. 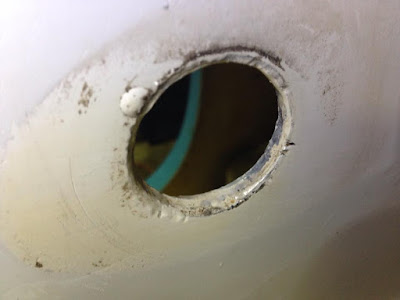 Check the daggerboard trunk for obvious damage, caused by running aground and bashing the daggerboard into the trunk base. If there is an inspection port by the trunk you can spray water where the daggerboard goes and watch inside to see if you see any water seeping in. Repair those areas with epoxy or our favorite, Marine Tex epoxy putty. In the first picture you can see a trickle of water, that indicates an area where water was leaking inside. We repaired the inside with West System epoxy resin and hardener, and the external part of the trunk with Marine Tex. 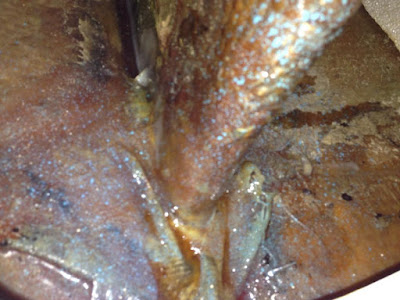 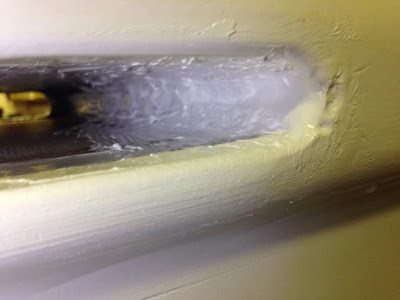 If you have to remove any deck hardware, leave one screw loosely attached at all times so that the wooden backer blocks inside the hull don't fall off. They were originally secured with putty and fiberglass, but that dries up and the blocks can fall off. 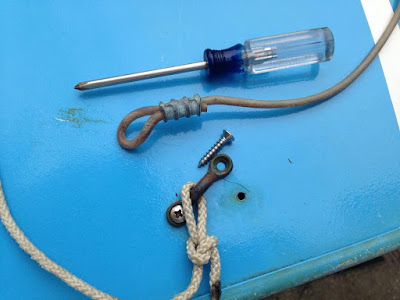 The aluminum trim and coaming are held on by aluminum rivets. It is best to buy replacement rivets from a Sunfish dealer to get the proper size, but the 1/8 inch diameter trim rivets can also be found at local hardware stores. Get aluminum rivets that have a 1/2 inch grip range. If the rivet has pulled out of the seam, drill a new hole next to the old hole and put in a new rivet. Try to not drill all the way through the trim, just the top, otherwise you could have a sharp edge on the bottom. File it off if this happens. 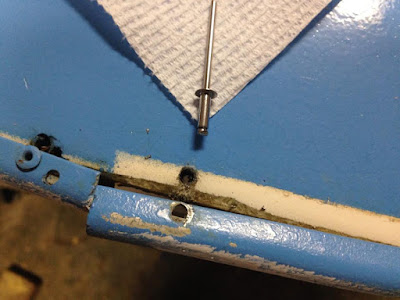 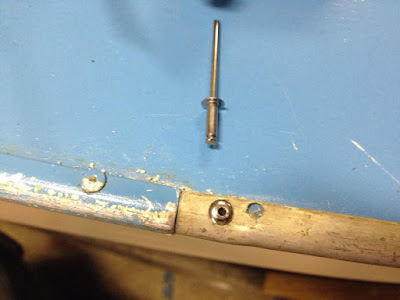 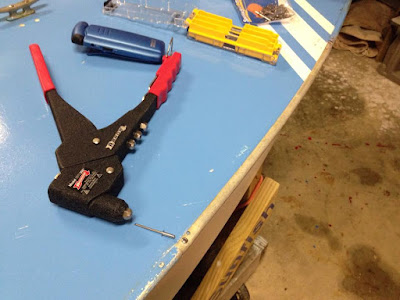 Tools and materials used for restoration and repair. 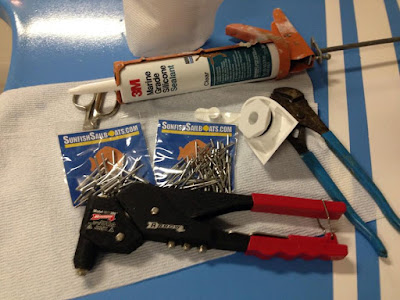 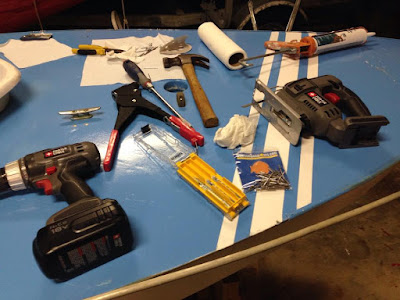 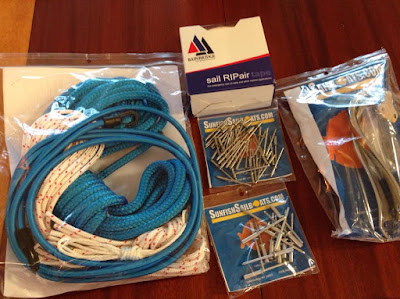 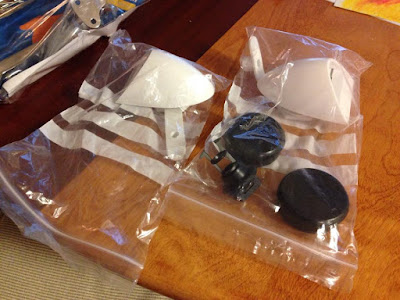 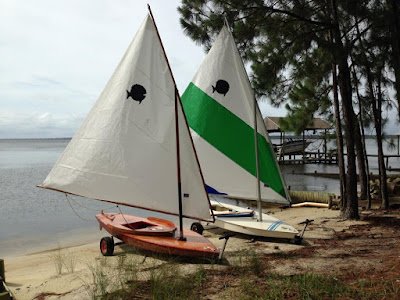 Made a parts haul a few months back, finally sorted them. There was some hardware dating back to the 1960s in there. It appears every part of the boat has changed since its inception.

I had been using some sawhorses to work on our Sunfish but spotted a "finishing dolly" in a Laser Performance photo that look pretty cool. I contacted Bo Williams at LP and he rounded up some photos and pics of a dolly that they use. It is approximately 8 feet long, 3 feet wide and 2 1/2 feet tall. The cool part is how the bunks articulate.


I used the base of my dolly and made some bunks to copy what LP has.


Used some extra plywood to make the ends.


Then I used on a 2003 Sunfish repair and it works great. It is easy to flip the boat and the bunks hold the boat secure while I move it around.

Picked 3 Sunfish in Gulf Shores AL. The owner of a Marine repair and storage business had the for 7 years and the kids didn't use them anymore, so he contacted me and we made a deal. He had 2 complete boats, one derelict and some extra flotsam. Took the double stack trailer to get them, the boat on top is Scout and the boat on the bottom is Boo. Had to leave Sugar 2 behind for a few days.

01 Apr 2015: Bought another cover, now all 3 fiberglass boats have one. I can't cover up the wood boats because the squirrels want to build nests in them :) In fact a squirrel ate part of the keel off of the Super Sailfish, which was actually helpful because it is rotten anyway.

22 Oct 2014: Skipper bought a Race Committee boat, a 1957 15' Sorg Runabout. Her name is Willow, and she will head down from Michigan in a few days on her Tee Nee trailer. Anybody heard of Sorg Boats from Detroit, MI?


Keith passes the flag on the Sorg to Kent.


Tucked in to the shack.


03 Nov 2014: Hung the Evinrude Lark 35hp. It needs several parts and running condition is unknown. Current plan is to put on a new motor and slowly restore the old one. Check out the post 1958 Evinrude Lark 35hp for progress.


11 Nov 2014: TeeNee trailer has some great design features. We will probably add a crossbar at the end for transom rollers, tie downs and a better location for tail lights.

14 Dec 2014: The bilge in the Sorg has some thin slats, we are not sure if that is supposed to be the floor or not. Also it is hard to get in the boat without stepping on the curve of the hull or catching a foot on the stringer, so we are going to put in a level cockpit sole in the midsection of the boat. That will be our boarding area. Here we are laying out some planks to get a few ideas.


The rear seat has a folding back, but the middle seat back is missing. Taking some measurements to build another seat out of 3/4 inch marine grade plywood.

15 Dec 2014: Ripping stringers, slats and battens from cypress for a cockpit sole.


Marking a notch for slat to fit around the seat support.


Transferred notch markings to opposite end of slats.


Center section finished. It rides on a rail so it can be slid back out of the way once passengers are seated.


Individually fit slats for the sides.


22 Dec 2014: Willow is getting a new Suzuki 4 stroke 25 hp installed at Lou's Marine in Gulf Breeze, Florida. Gary is the Owner and has taken this fun challenge on himself, having recently worked on a 1954 Lyman Runabout. Willow will be getting remote steering, remote start, new lights, a bilge pump and external fuel filter. I got to drop in and pick the spots for the steering wheel and throttle.


Kind of like dropping in during the middle of a surgery.


23 Dec 2014: Swung by Lou's again to decide on tachometer installation location. Gary was excited for us to get a good look at the boat so he rolled her out to better light at the edge of the shop. She is getting special treatment, spending all day and night inside.


05 Jan 2015: Picked up Willow today, Gary went over the Suzuki checklist and systems with me. Gary is the Owner of Lou's Marine in Gulf Breeze, Florida, worked there with his Dad since the 80s. They are the oldest Suzuki dealer in Florida and 4th oldest in the U.S. He expects a ride when it warms up!


Gary's tip for the flush attachment, add a wire to keep the muffs from slipping off the back.


We found good spots for the battery, bilge pump and external fuel filter. The gas tank will eventually find its best spot, if it were just a bit shorter it would fit i=under te seat nicely.


Gary did a great job installing the throttle and steering, it took a little whittling on the steering shaft so that the steering wheel trim cap fit. He also installed a fuse box under dash and wired up the bilge pump and lights.


'Twas several nights after Christmas, and all through the town, the Skipper was asking, "When are we taking the lights down?"


Willow back at the Casa.

06 Jan 2015: Bought a piece of 3/4 inch fir marine plywood at Gatlin Lumber, used the Ford Edge to bring it home. We will use this to cut a new seat back for the middle seat.


08 Feb 2015: Willow went for sea trials, she ran great. 12 mph at 2700 rpm, 25 mph at 5000 rpm. She had a few small leaks, but they slowed after a few minutes and less than a cup came into the boat. She rides great with her lapstrake construction and carried 3 adults with no problems.

Also found the house that Harry C. Sorg lived in around 1953.


15 Feb 2015: Took Willow out for her second cruise, she ran great and carried 4 people. 2 passengers sat in the back seat and we could have a normal conversation even with the motor running at half speed. Anticipated fuel burn is 1 gph.

21 Mar 2015: Started work on making a back for the middle seat, which was missing. It is a little taller and wider than the aft seat back, but I traced the aft seat back to get a starting point.

The middle seat is a bit taller and wider than the aft seat, so I added an inch all around.


I cut out a piece of scrap okume plywood to get an idea of the curve and height of the seat.


Used the okume scrap to trace the ends and the rest was traced with the cardboard. The small folding tables worked great as mobile work tables.


Cut out the middle seat.


Oops, I didn't consider the concave curve of the hull, so I'll trim the sides a bit. That explains why the seat back supports on either side of the hull curve out a bit at the top.


25 Mar 2015: Used the template to see how much of the side needed to be trimmed, then trimmed the seat back.


Also began work on the stem leak. The bow stem curves down and lays on top of the keel. The leak is coming in around the 3rd to 4th rib up from the end of the stem.


We think the leak is by that gap on the keel/ bow stem joint by the red paint. Water comes in to the boat at a slow trickle, then we think it drains out once we put it back on the trailer, runs down the keel and pools where that discolored area is. There is also a small rust stain on the trailer there.


Willow propped up so I can get to the keel.


The keel comes up and meets the bow stem, and there is a scarf joint there. We suspect that is where the leak is.


Scraping out the failed sealant between the plank and the keel.


The old sealant kind of flaked out.


Old paint needed to be cleaned off the bow eye. We used a razor blade.


Used Pettit Easypoxy to touch up the stem repair.


Not a perfect match but the fish won't mind. (05 Apr 2015 Note: Found out the color should be Rustoleum Topside Oyster White)>

01 Apr 2015: Willow got measured for a new galvanized trailer at Eddie English Company, Inc. We are going to sell the Tee Nee trailer IOT save it from certain destruction by the local marine elements.

Click her for the rest of Willow's story.
Posted by Clark at 6:00 AM 2 comments: