We stumbled upon some great photos of the USS Portsmouth in the digital archives  of the Naval History and Heritage and Museum. One we had not seen before was "Old Poverty" under full sail.

We enjoyed looking at the older photos, some dating back to the 1880s, as they show many of the ship's boats, and there were a lot of them. 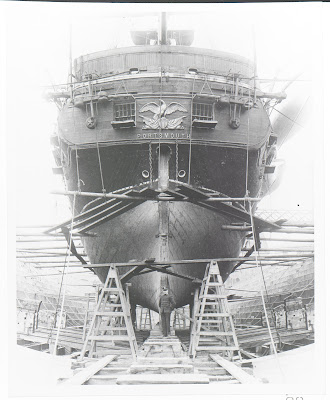 A very impressive stern, we'd like to have the emblem on the back. Did you notice the gentleman standing by the keel?

"The second USS Portsmouth was a wooden sloop-of-war in the United States Navy in service during the mid-to-late 19th century. She was designed by Josiah Barker on the lines of a French-built privateer, and built at the Portsmouth Navy Yard, directly across the Piscataqua River from Portsmouth, New Hampshire. She was described as an improvement over USS Saratoga built in the same shipyard a year earlier. Portsmouth was launched on 23 October 1843 and commissioned on 10 November 1844, with Commander John Berrien Montgomery in command."

Skipper's ancestor Lt Benjamin F. B. Hunter was listed in the ship's roster as Acting Sailing Master with the 1847 Pacific Squadron, during the Conquest of the Californias. The Portsmouth is also depicted on the official seal for the city of San Francisco.

Naval History and Heritage and Museum