"The NC-4 was a Curtiss NC flying boat that was the first aircraft to fly across the Atlantic Ocean, albeit not non-stop. The aircraft was designed by Glenn Curtiss and his team, and manufactured by Curtiss Aeroplane and Motor Company, with the hull built by the Herreshoff Manufacturing Corporation in Bristol, Rhode Island. The design requirement emerged during WWI, the US Navy needed anti-submarine aircraft on the Eastern side of the Atlantic and a safe way to get them there, hence the need for an aircraft that could cross the Atlantic on it sown versus being shipped across.
In May 1919, a crew of United States Navy aviators flew the NC-4 from New York State to Lisbon, Portugal, over the course of 19 days. This included time for stops of numerous repairs and for crewmen's rest, with stops along the way in Massachusetts, Nova Scotia (on the mainland), Newfoundland, and twice in the Azores Islands. Then its flight from the Azores to Lisbon completed the first transatlantic flight between North America and Europe, and two more flights from Lisbon to northwestern Spain to Plymouth, England, completed the first flight between North America and Great Britain." 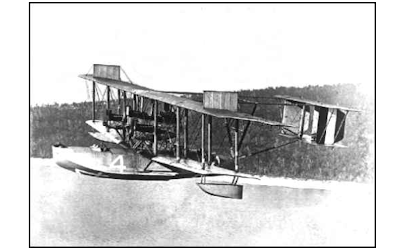 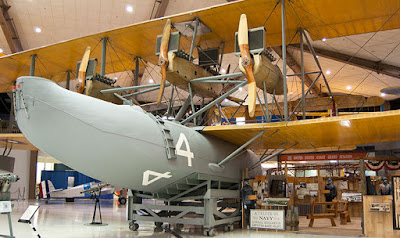 Trivia bits:
-The designation NC came from the cooperative effort of the Navy (N) and Curtiss (C) to build the aircraft.
-Tow other Nancies (NCs) attempted the flight, but did not complete it. NC-1 was lost at sea, crew rescued. NC-3 was forced to land just outside the Azores and was damaged, the crew sailed her into port through gale force winds and 30-40 foot seas.
-The flight covered 3936 miles with 52 hours 31 minutes of flight time over 19 days.
-Chief Machinist Mate Eugene Rhoads was a pilot as well, but not a designated Naval Aviator. He went on to a fine career as a pilot.
-Herreshoff Manufacturing Company, a builder of the finest ocean crossing boats, built the hull.
-The engines' fuel supply is gravity fed. Little propellers behind the center Liberty V-12 engines are part of a windmill pump system that pumps fuel from the main tanks up to the gravity tank in the upper wing. 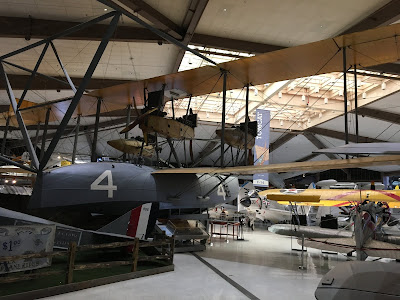 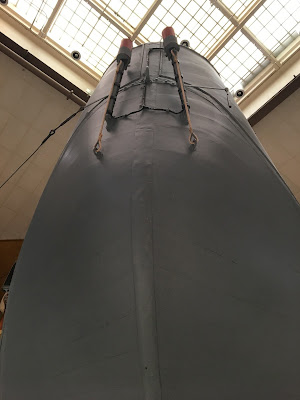 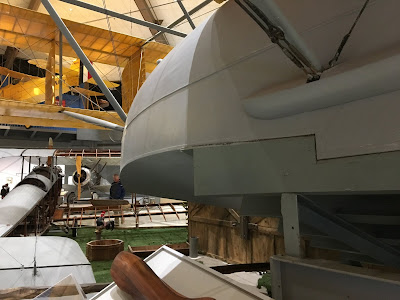 Take a virtual flight in NC-4, through the magic of the game physics sandbox game Garry's Mod.

NC-4 arrived in Plymouth, England on May 31, 1919 and tied up at the Barbican in Sutton Harbour. NC-4's arrival was scheduled as a tribute to the Mayflower voyage, there is a commemorative plaque placed next to the Mayflower Steps, where the Pilgrims set off for the New World in 1620. Our friend Doug E. snapped this photo of the plaque. 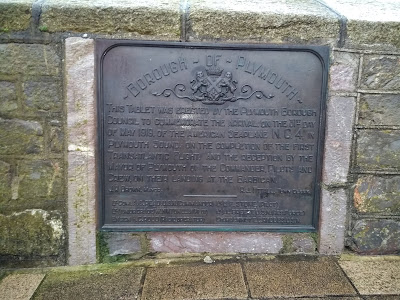