Here's a repost from April 2018. We have been using these trestles for 3 years now and they are very good additions to a boat shop. And to a back porch. Very useful for additional seating too. I have made close to a dozen from lumber that washes up onto the beach, usually 2x6 pressure treated. Read on...

I started fiddling with building a carpenter's trestle. I had seen a nice looking bench at the John Gardner workshop in Mystic Seaport and came across the term "trestle" while looking for information on tools in the 1918 book Farm Mechanics. Sounded like just the thing I need to steady pieces while I worked on them. We had some hunks of cedar, beams from our covered porch in Texas, that were being used as benches and plant stands, so I decided to use those. They'll get to be benches or plant stand when not being trestles, but now have new legs. Here is my adaptation so far. 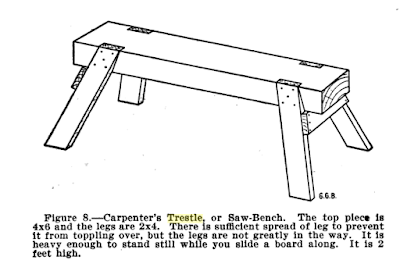 Here is a similar bench in the John Gardner Boat Shop at Mystic, versatile, used to support boats during storage or maintenance. Upright or flipped. 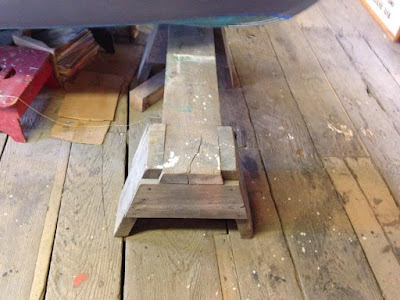 I cut an angled notch for the 2x6 so it sits flush at the top, trimmed the 2x6 flush. The leg sits at a nice angle so I'll cut three more.


I used a reciprocating saw first to cut the notch, then found I could cut them faster with a hand saw. A variation of this that I came up with later was to cut the notches all the way to the end of the seat with 10 degree bevel set on a circular saw, a time saver.


Cut a brace for the legs.


We can also use it as a plant stand and regular bench.


One tip was to cut a V shaped notch into one end of the seat, about 2 inches wide across the top of the V. The notch can be used to help hold a board, wedge the end of the board into the ground and steady it with one hand and the V. Later benches have the legs and cross brace set in about an inch. this allows clamps to be used on the end. Don't set them in too far, or the bench could become unstable.

Here's a variation of the bench we made with some 2x8 lumber that washed up on our beach. 2x6s work great as well. 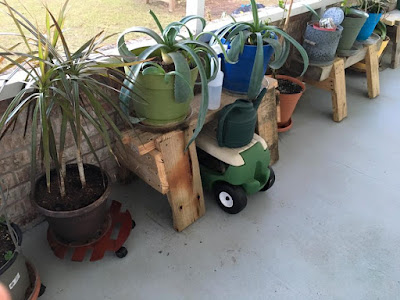 Log of Gardner Bench.
Posted by Clark at 7:01 AM