The last PODS container for the Armada has arrived, which was also the first one to depart back in February. 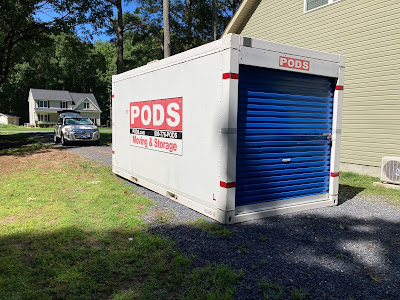 The mystery of MADISON's missing amst was solved, for some reason I put it in this PODS and she went in a separate PODS. 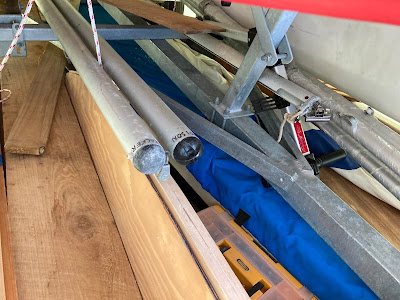 Everything arrived in mostly good shape, but there were some rough roads along the way, several items had shifted and a couple of 2x4 cross braces on the platform I built ripped away from their screws. As a result the platform partially collapsed and had trapped the catamaran SMEDLEY in his spot. The thin plywood I chose was a fail, it sagged excessively, so the Learning Lessons were to use 2x6 bracing with more fasteners and thicker plywood. One more Lesson was Learned, I  forgot to strap down SMEDLEY across his front set of rollers, like I had done aft. Unfortunately, at one point during the journey enough force was transmitted to the container and transferred to the Catfish trailer and SMEDLEY to lift the pontoons off of the front rollers, shove the trailer sideways and when SMEDLEY came down a fist size hole was punched into each pontoon. So in addition to having some 2x4s resting on his deck, SMEDLEY was caddywompus on his trailer, and the trailer jack had pinned in the little Sailfish WINNIE. 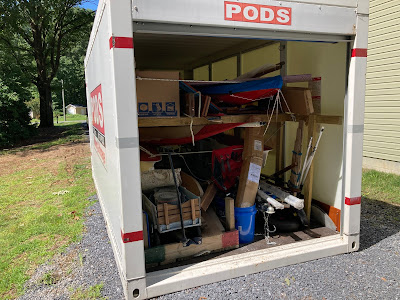 We scratched our heads for a bit on how to safely unload the container and prevent further damage to SMEDLEY or damage to ourselves, and began by unloading all of the items we could reach without crawling on the platform. This PODS contained a lot of spare Alcort parts, another one of Skipper's wagons, a work table, some carpenter's benches and Christmas decorations, in addition to our Alcort boats Sunfish ZIP, Super Sunfish TRACKER, Sailfish WINNIE, Catfish SMEDLEY and parts for our Pascagoula Catboat build. 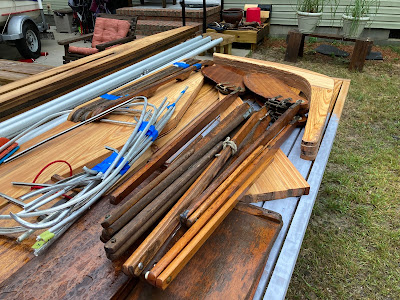 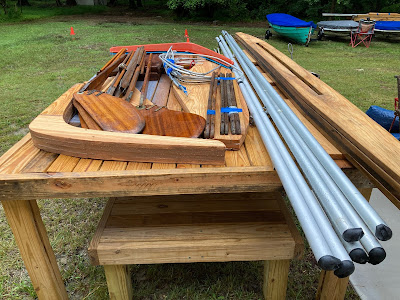 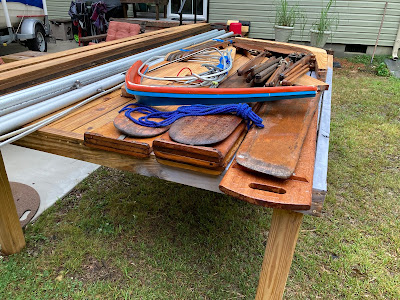 Skipper devised the plan to get the heavier items like ZIP off of the platform, she decided it would be easier to slide ZIP down a few feet at a time vs the 4 foot drop from the paltform to the ground. She pressed the Sunfish Work Dolly and Catboat strongback into service, she towed them over with her mower. We slid ZIP partway onto the strongback and took a break to admire her plan. 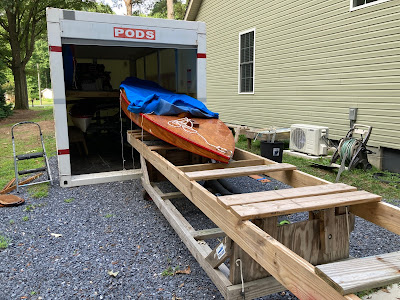 Then we pivoted ZIP 90 degrees and eased him down onto the Dynamic Dolly. One boat down, 3 to go. 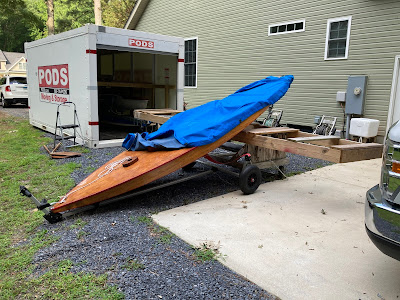 We tried to wiggle SMEDLEY back onto his trailer, that was a No Go. At this point I had to gingerly crawl up on the platform, untie TRACKER and lay her down so we could repeat the unloading gymnastics. 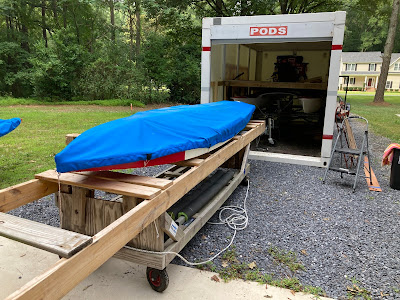 Skipper happily towed TRACKER back to our pile of boats.
With 240 pounds of Alcorts removed from the platform, we were able to lift SMEDLEY back onto her rollers and move the trailer jack wheel away from WINNIE. Then we extracted WINNIE, put her on a furniture and she retreated to the garage with ZIP and ONKAHYE. ONKAHYE, btw, is graciously storing several lateen rigs from TRACKER and ZIP, although she may be confused and thinking that she gets to try out those rigs. She is also hosting ST. JACQUES' sprit rig and muttered something about "possession being 9/10ths of the law..." 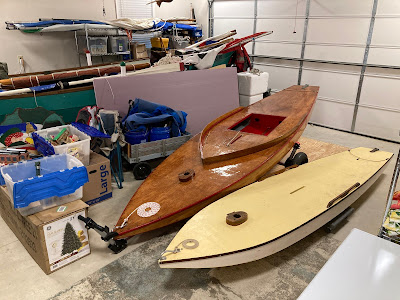 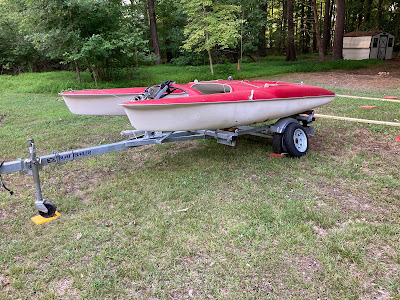 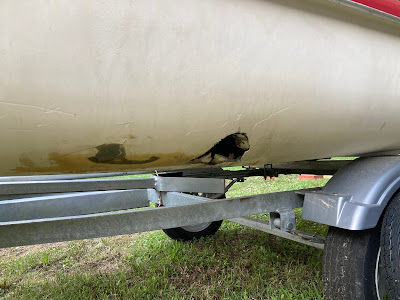 Cooling water intake on the starboard pontoon, because SMEDLEY goes so fast that her hull heats up... 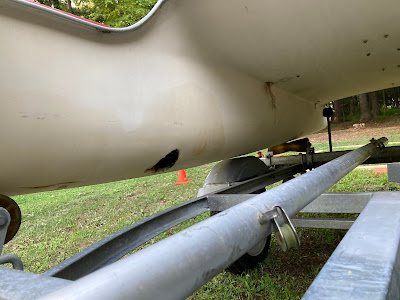 In SMEDLEY's and our defense, the fiberglass on that area of the pontoons is super thin, the gelcoat is almost as thick as the fiberglass. There was damage to the same area when we got the boat, so after we repair we'll still have to be super careful with the boat during transport, and probably add more support points. 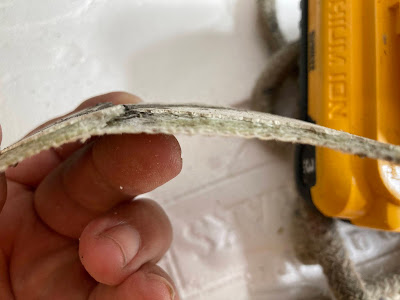 So at this junction all of the Armada is on station, and we can declare that the Mid Atlantic Squadron has formed! ONKAHYE, ZIP and WINNIE in the Garage (aka Boat House) and (L-R) below SMEDLEY, TRACKER, ST. JACQUES, WAVE, MADISON, PHOENIX, SCUPPERS, SCOUT, CLARK AND SACAGAWEA. Not pictured, the catboat bits for MARGARET ROSE. 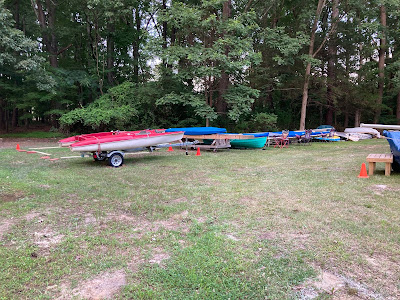