Today we marked out the spacing for the Sunfish Shack 2x6 deck boards, then put down the 12 boards that we had in spots where we could roll a few dollies up and check the fit. We found that the Penobscot deadwood keel barely clears because the deck joists are sitting on pavers now vs being set in concrete, and we set the deck boards on top of larger 2x6 joists vs insetting them over 2x4 joists. Overall that raised the surface of the deck close to 3 inches over what it had been. Added to the increased deck height were some low spots in the yard, we added some topsoil at the base of the ramps to get the same drop all the way across the base. You might note in the photo that the ramps on the right side of the Shack have been shimmed up a bit with a 2x6 backer board set on another paver block, then we graded the ramp entry with more topsoil. A little more grading in the yard will be needed to eliminate some low spots and ensure that water flows away from the house and the Shack to an existing drainage ditch behind the line of bushes.  The last adjustment we made to ensure ST. JACQUES deadwood keel would clear the deck before the dolly wheels started up the ramp was to cut a small notch on the end of a temporary deck board, per Skipper's direction. 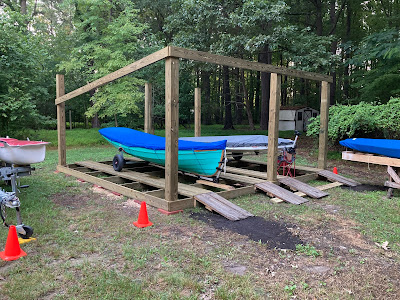 Why not make longer ramps with less slope? We wanted to use some sections of ramp that we brought with us from the Gulf Squadron Sunfish Shack, they were hurricane salvage and had played a role in the rescue of the Armada from the last Shack. They had become flotsam during the storm and we used them to pull boats and dollies up over a small stone wall in the front yard, so it felt wrong to just send them to the Remote Storage Facility (landfill) after we remediated the Shack in Florida. So they made the move out to the Mid Atlantic Squadron in one of the PODS containers, and with lumber prices up, turns out that's about $65 worth of lumber....maybe we should have moved the entire Shack :)
Log of the Sunfish Shacks.
Posted by Clark at 7:58 AM